Damir Imamović is born 1978. in Sarajevo, Bosnia and Herzegovina. He spent his formative years living in the besieged city of Sarajevo and he picked up playing guitar when he was 15. Later on he studied philosophy, but love for music and especially “sevdah”, traditional genre of folk music born in Bosnia and Herzegovina, prevailed. In a musical sense, “Sevdalinka” is a characterized by slow and moderate tempo and intense, emotional melodies. Nowadays, Damir is well-known as one of the most sophisticated musicians who is writing, composing and singing “sevdalinka”. He proved himself as a good writer too and his recently published book “Sevdah” has great reviews. If you are interested in pursuing the book, follow the link: http://www.knjiga.ba/sevdjah-m4910.html. 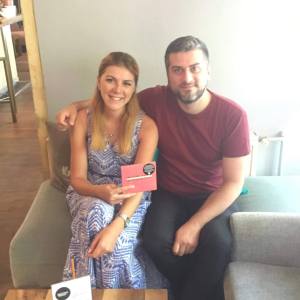 International College Ca’Foscari was honored to host Damir in the “WaterLines” project, where he was working with different artists and students. On the question, what are the projects he is working on, he replied: “I’m working on several different projects at the time. I used my time in WaterLines project to reaseach potential of sevdah performance that included movement. Performance «Moving sevdah» with Michela Lorenzano that took place in Palazzo Grimani on October 13th 2016 was the result of the two weeks of work on that project.” Since he comes from Bosnia and Herzegovina, I wanted to know if there is any correlation between Italy and Bosnia and Herzegovina, concerning “sevdah” as musical genre. Damir commented that “Venice was very important as one of first European outposts for raising awareness about South Slavic cultures. For example, in 1774. the famous «Viaggio di Dalmazia» by Alberto Fortis was published in Venice. This book contains the famous «Hasanaginica» song that represented at the time the first finding of the particural poetic tradition in South Slavic language (later on to be named «sevdah»). Many other cultural, economic and political connections exhisted.” On my question how did he like the San Servolo and Venice, he said that “Venice in itself is famously inspirational for artists. Even though the city today is mainly touristic, its charm and importance are alive and can provide endless inspiration.” He also said that he met some interesting people and he hopes to remain in contact with them. Moreover, he worked with students where he gave lectures about “sevdah” and his new project “Moving sevdah”. Finally, Damir would definitely recommend Waterlines as the great platform to other artists, in order to find inspiration, work with other artists and create new artistic pieces.

If you would like to discover more about the work of Damir Imamović or purchase a CD collection, feel free to follow these links: https://www.facebook.com/damirimamovic/?fref=ts or http://damir-imamovic.bandcamp.com/album/dvojka.